We Remove Bee and Wasp Nests in Sacramento, Roseville, and Elk Grove

At Apex Pest Control, our expert technicians have been providing quality pest control services at affordable prices for more than 40 years. We ensure that our professionals are licensed, bonded, insured, and up to date on the newest pest control products and methods. We provide top-notch service throughout the entire Sacramento Valley.

What to Know About Wasps

Wasps are generally not an issue unless they build their nests on your home or places of high traffic in your yard. It can be dangerous to get too close to wasp nests, because unlike bees, an individual wasp can sting multiple times. It is not recommended to try to remove a wasp nest on your own. A professional wasp removal service will wear protective clothing and bonnets in order to safely approach the nest.

What to Know About Bees

Honey bees are beneficial insects that are crucial pollinators for crops in the Sacramento Valley. Our first recommendation would be to call a beekeeper to move the colony, rather than eradicate it. In the spring, bees often ball up in trees while searching for a new nesting site, and will move along shortly of their own accord.

Bee stings are not harmful for most people, but can cause a severe allergic reaction in others. Bees can swarm to protect their nest, and can be a nuisance in high traffic areas. In addition, bees can damage your home if they nest in a wall. In these cases, we can treat for bees as a last resort.

The Three Types of Wasps 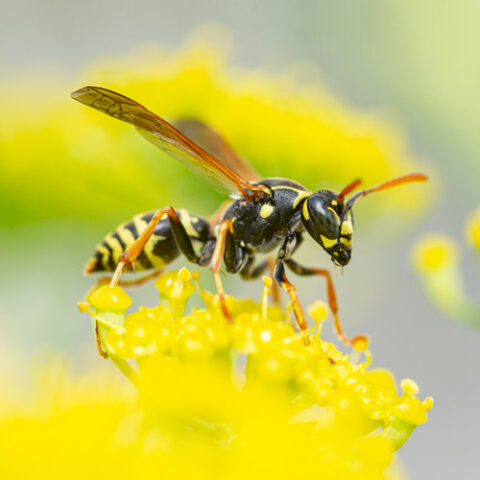 There are several species of “yellow jackets” that we encounter, the most common being the western yellow jacket (Vespula pensylvanica), commonly called “meat bees”. They typically build their nests in rodent burrows or other protected cavities such as voids in a house wall or ceiling. Yellow jackets defend their nesting sites very aggressively and may pose a serious problem when their nests are located near a home, play area, or picnic site. While bees have a barbed stinger, allowing them to only sting once, a yellow jacket has no barb on their stinger, allowing them to sting repeatedly. The proper treatment of nests in the ground can be very difficult. Aerosol sprays may not be adequate to properly treat the nest. Professionals, attired in protective clothing and bonnets, may need to power spray the nesting area with liquid insecticides to properly treat the nests. Insecticidal dusts may also be used to treat nests located in wall or ceiling voids.

Most paper wasps are approximately one inch long with long legs and a very slender waist. They build their paper nests in protected areas such as under eaves, in attics, in dense bushes, and hollow pipes/tubes. Paper wasps are not very aggressive unless provoked. Over-the-counter aerosol wasp sprays work very well at killing adult wasps. Proper protective clothing should be worn to prevent stings. Treatment should also be done in the evening hours when temperatures are cooler and adult wasps are less active. Nests should be knocked down after all adult wasps are dead. 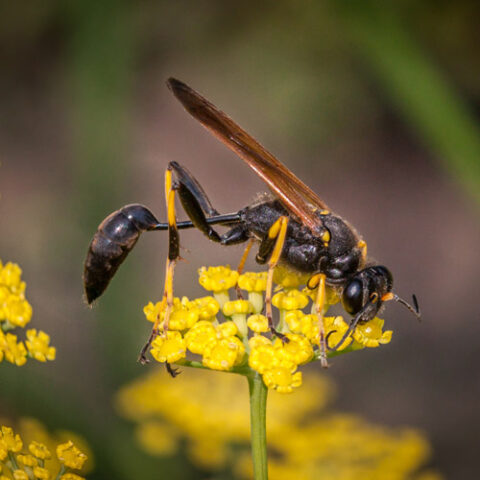 These black and yellow solitary wasps have a very thin waist. They build their nests out of mud and attach to them to ceilings or walls. A single female wasp cares for each nest. The mud nests have cylindrical cells in them where the female wasp deposits a single egg and a dead insect to serve as food for the offspring. They do not defend their nests and rarely sting. Nests can be easily knocked down without spraying.

Do You Need a Bee and Wasp Exterminator?

If there is a bee or wasp nest in your yard that is away from high traffic areas, they may not be a problem and can be left alone. Most bees and wasps will not bother you unless they feel their nest is threatened. However, if their nest is not easily avoided, it will likely need to be removed, especially if it is one of the more aggressive species. A bee and wasp exterminator will know how to remove the nest safely.

The Importance of Safe Bee and Wasp Nest Removal

It is dangerous to attempt to remove a bee and wasp nest on your own. Professional bee and wasp removal require protective clothing and specialized techniques. Some nests may be difficult to access, and aerosol sprays do not fully penetrate. It is wise to trust experts like Apex Pest Control who can identify the species and know the proper methods for safe nest removal.

Apex Pest Control has been serving the greater Sacramento area since 1978. Our licensed, bonded, and insured technicians receive continuing education and training to keep their pest control knowledge up to date. We want our customers to be able to enjoy their homes without having to worry about pests. We provide safe bee and wasp removal services at competitive rates to provide you with peace of mind.

Have you seen a bee or wasp nest in your home and yard? Not sure what type it is, or if it needs to be removed? Give us a call or use our contact form so one of our technicians can come to take a look and suggest solutions.